The clash between squatters and police on October 10 was the culmination of years of back-and-forth between the two sides but also at hand are wider issues of development and displacement. 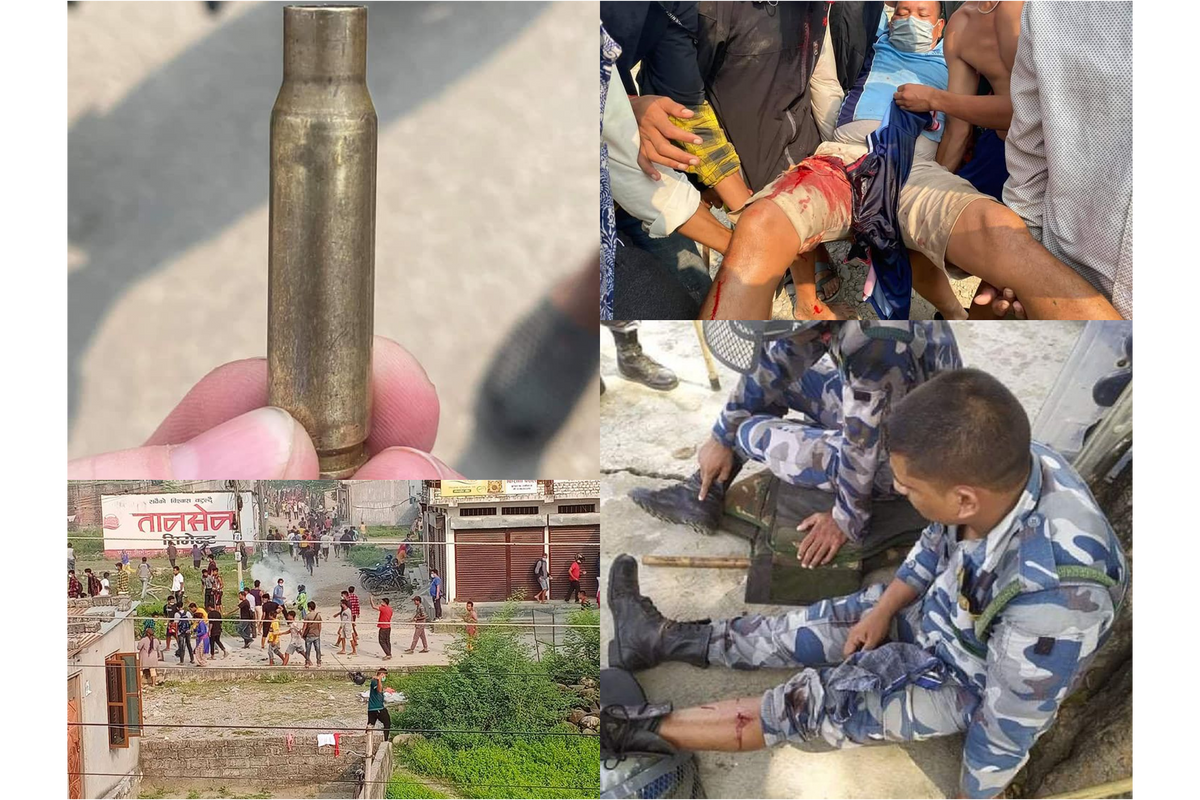 (All photos courtesy of Mahuri Home)

On October 10, Birendra Kurmi was coming home from work when he came across a violent clash at the Motipur Industrial Corridor. Police personnel were beating up citizens and Kurmi decided to film the violence on his cell phone.

Video of violent clash at the Motipur industrial corridor

“Since he was chanchal, a troublemaker, instead of coming home, he decided to film the police officers beating people up,” Bipin Kurmi, Birendra’s brother, told The Record over the phone from Motipur. “I think that is why he was targeted, beaten, and eventually shot.”

Bipin said that he went to Butwal Hospital, then Bhairawa Medical College looking for his brother. He was assured by the police that while Birendra had suffered some injuries, he was otherwise fine. He was shocked, then, to finally see Birendra’s dead body, with a bullet wound on the waist and severe bleeding from beatings all over the body. 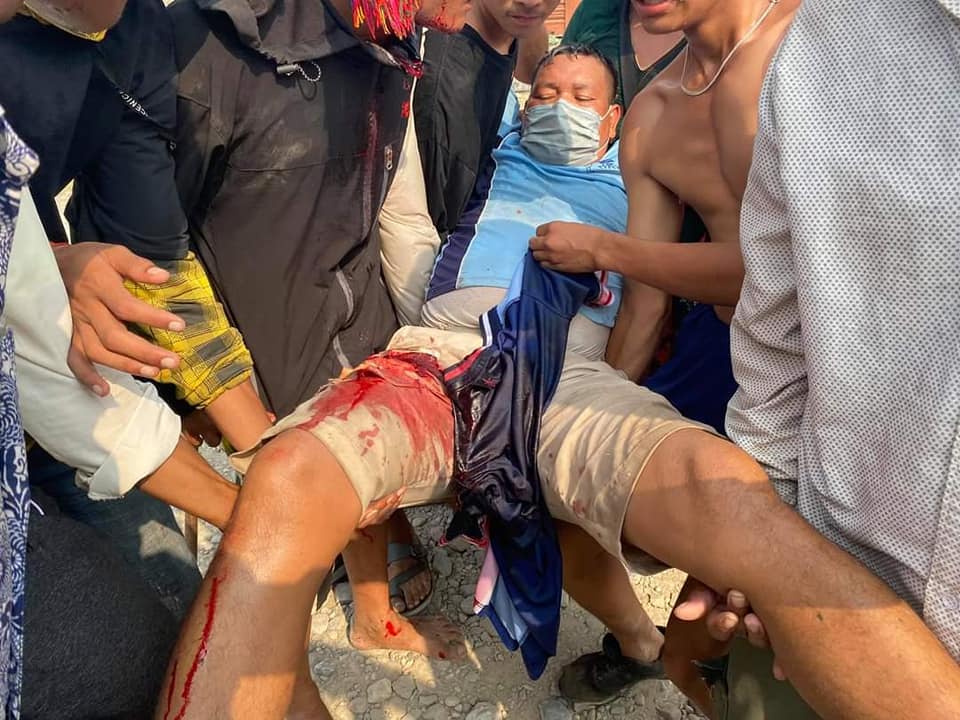 The incident that day had been sparked by police personnel attempting to demolish and evict squatters from the industrial corridor. In the ensuing violence, four people, including Birendra, were shot dead by the police while dozens, both police and citizens, were injured.

But according to Bipin, Birendra was not a squatter. He was a construction worker who was simply coming home from a long day of work.

“We have land in our village, we were not claiming any land,” said Bipin.

Among the four people killed were 30-year-old Birendra, 48-year-old Ramesh Pariyar, and 17-year-old Yujan Kumal, according to the Kapilvastu-based human rights organization Mahuri Home. The identity of the fourth victim has yet to be confirmed.

Mahuri Home spokesperson Ram Bikas Chaudhary said that at least 18 civilians and 69 security officials were wounded in clashes that day, but the actual numbers of casualties may be much higher, since many people fled after the “shooting spree” and have been hiding in fear of being detained by the police. 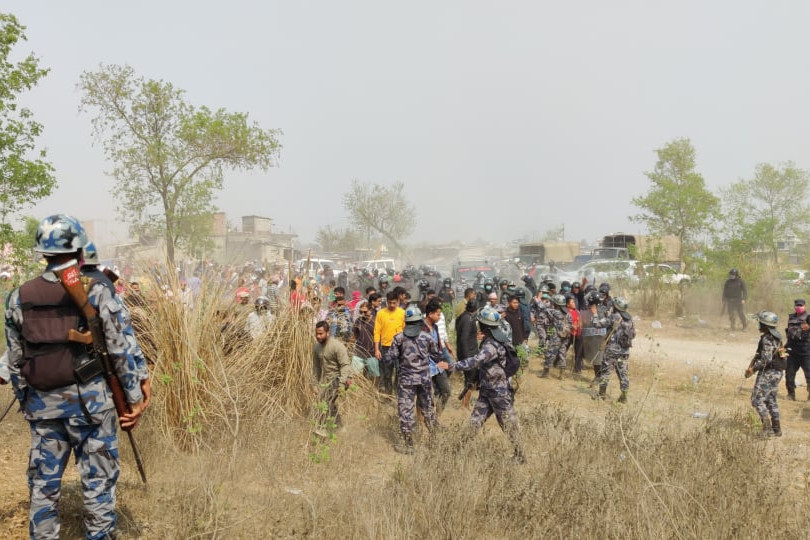 The clash was ostensibly between squatters in the designated industrial zone and security officials trying to chase them out, but just like Birendra Kurmi, Ramesh Pariyar too had nothing to do with the squatters, said Ramesh’s brother Bishnu.

Ramesh too was a construction worker in Syangja and had come back to Rupandehi to help resolve a dispute between some friends.

“I have no idea why the police blindly shot people that day. The dispute had been going on for so long,” Bishnu told The Record over the phone. “I am still in shock and don’t know why my brother is dead.” 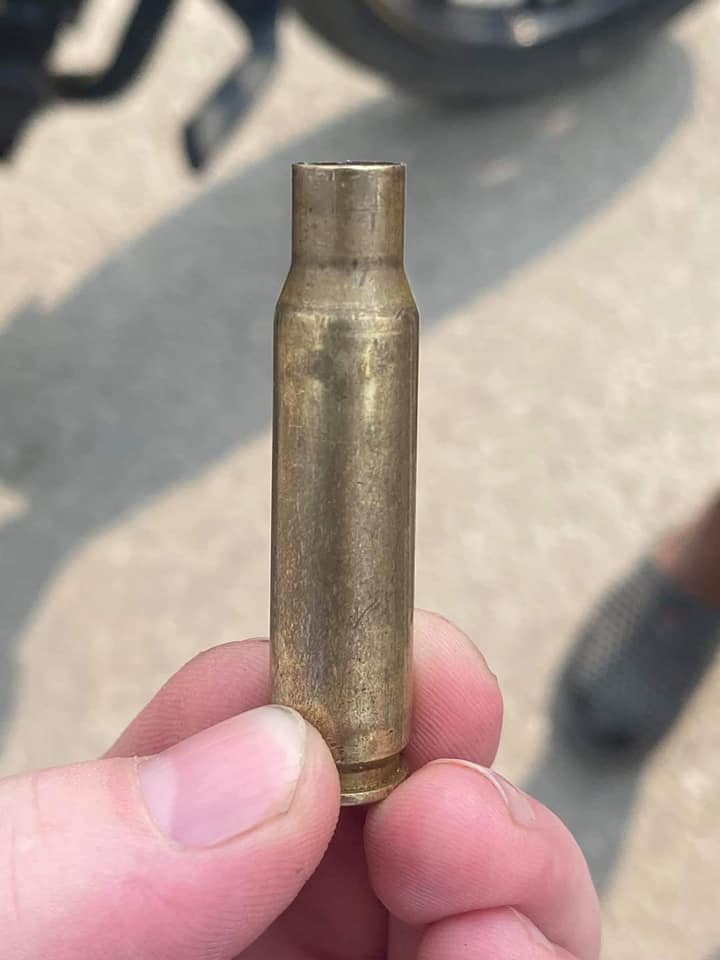 It is possible that either Birendra or Ramesh or both were part of the group claiming land in the industrial zone, and their brothers may be hiding this to avoid their deaths being dismissed by the media as “deserved” because the men were squatters. Regardless of whether the people killed were squatters, the fact remains that by all accounts, the use of force by the police that day was excessive, disproportionate, and brutal.

Suresh Pariyar, a Rupandehi-based journalist affiliated with Rajya Television, was at the scene of the incident on October 10. He said that while numbers are difficult to ascertain because things were so chaotic, the clashes were between about 6,000 civilians and 2,000 security forces, who were part of the Armed Police Forces as well as the Nepal Police’s riot control from various districts in the area. 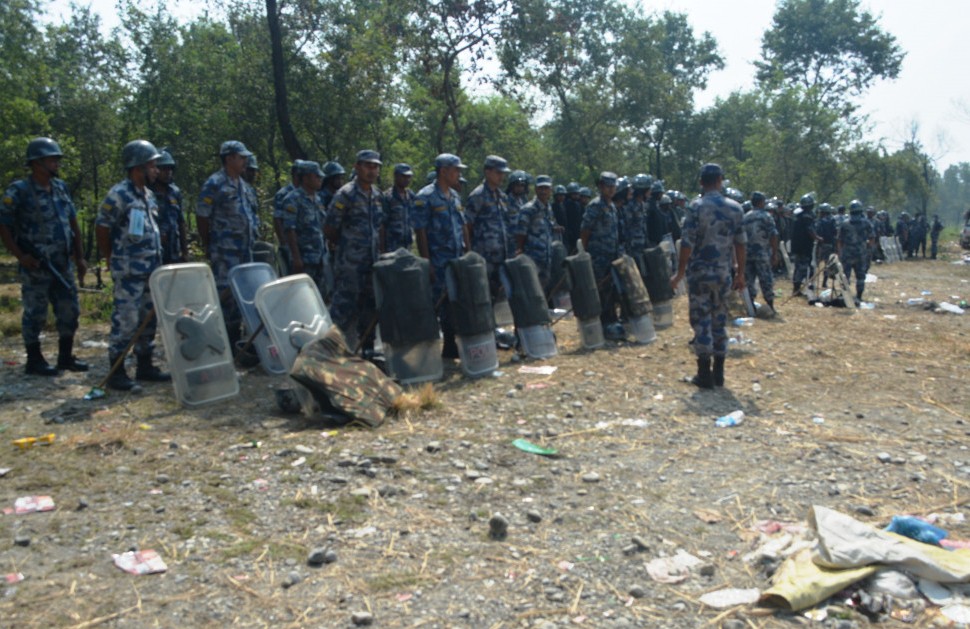 “I was detained even though I am a journalist,” Pariyar said. “Police really misbehaved with me and didn’t let me take any photos and videos. I was eventually let go but they were detaining and beating anyone they saw. Sometime later, I heard noise from andhadhun bullet firing.”

The fatal clash on October 10 was not an isolated event, but a culmination of a years-long dispute over land in Motipur. In 2016, when the government announced its plans to acquire 814 bighas of land in Motipur to construct an industrial zone for Province 5 (part of the larger scheme of setting up industrial estates in every province), many locals protested. According to a report in The Kathmandu Post, 100 bighas of the planned 814 were home to 700 families, who were not willing to surrender their land to the government. Many people living on the land were sukumbasis, squatters who did not possess ownership documents for their homes.

In 2017, some residents of the region said that an agreement had been reached among the government, the Butwal Chamber of Commerce, and locals so that residents would not be displaced, and 25 percent of the allocated 814 bighas of land would be reserved for houses, schools, and forests. The same year, the government prepared a detailed project report, followed by an Environmental Impact Assessment in 2018, but as Nabin Dhungana noted in Onlinekhabar, there was little clarity on where the massive investments necessary for the industrial zone to be established were going to come from.

Nevertheless, on March 5, 2021, then finance minister Bishnu Prasad Paudel laid the foundation stone for the Motipur Industrial Estate in the midst of protests. Then too, there was a clash between security personnel and locals in which 10 civilians and two police officers were wounded. Protestors told Mountain TV that they had not been consulted in the decision-making process to construct an industrial zone in the area, they were worried about being evicted, and some expressed concern about the environmental impact of factories. Despite previous agreements with locals, the government had not communicated or consulted with people living in the Motipur corridor about displacement, compensation, or the timeline for the project, leading to confusion and protests. Minister Paudel dismissed the protestors in a press conference as “misguided anti-developmentalists.”

Till 2021, the conflict appears to have primarily been between squatters fearing displacement and government officials involved with the industrial project, but according to Motipur resident Chavi Lal KC, things took a turn when earlier this year when ‘sukumbasi khulyo’ rumors started to spread, and people from various districts across the country started to come to Motipur in the hopes of getting land documents.

It is unclear how and why the rumor that land was being distributed spread, but the fact that some sukumbasis were given lalpurjas, land deeds, by the government in the Butwal sub-metropolitan area and elsewhere, led many others, both landless and landholding alike, to hope for the same. 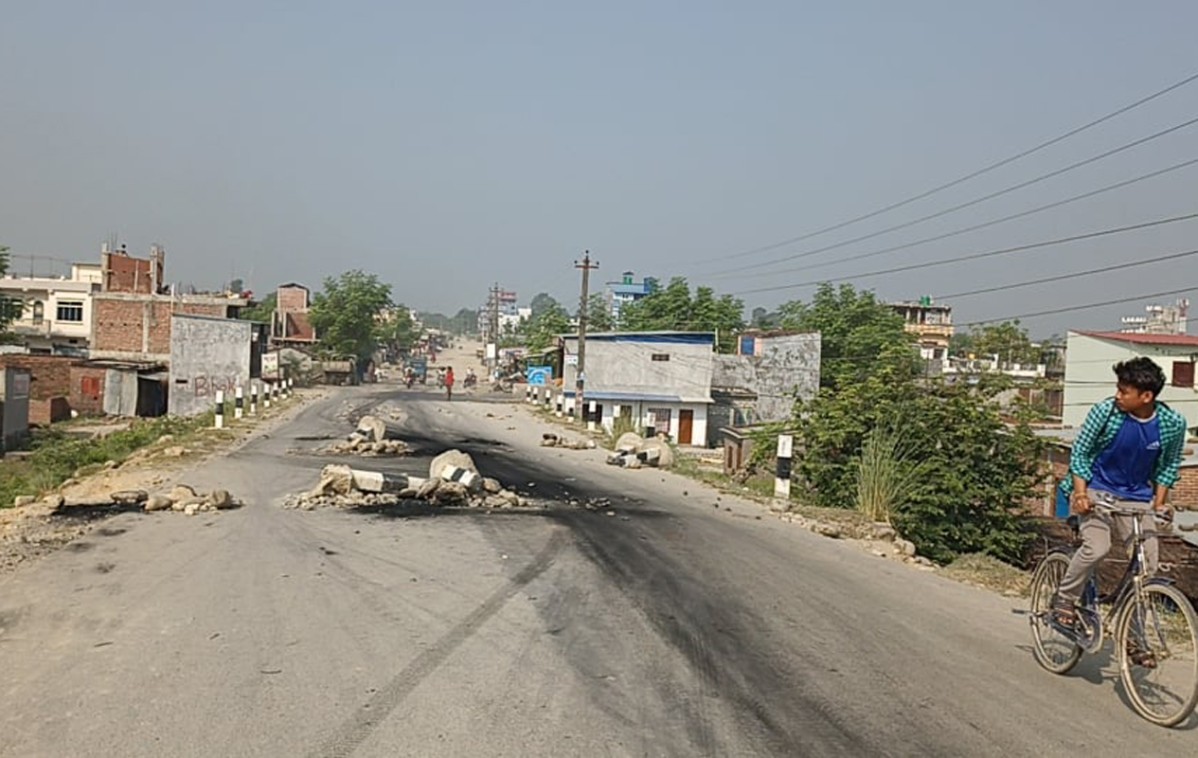 Thousands of people started squatting in the designated industrial zone in September, and on September 13, the Rupandehi District Administration Office declared the zone a prohibited area. The prohibition orders were ineffective, with people building sheds in the area during the day, and the police burning them down during the night for weeks on end. Police frequently beat the squatters to chase them out, but as Bablu Mallah from Tilotamma told Kantipur television, sometimes the squatters beat the police right back.

“We don’t run away as soon as the police come. We tell them that all we are asking for is 5 dhurs, 10 dhurs of land. We attack the police when they attack us, but our fight is not with the police, it is with the government,” Mallah says in the interview.

According to journalist Suresh Pariyar, conflict between the squatters and police had been ongoing through late September and early October, but there had been no meetings between representatives of the squatting groups and government officials. The government cracked down with force, instructing the police to remove people from the industrial zone by any means necessary. 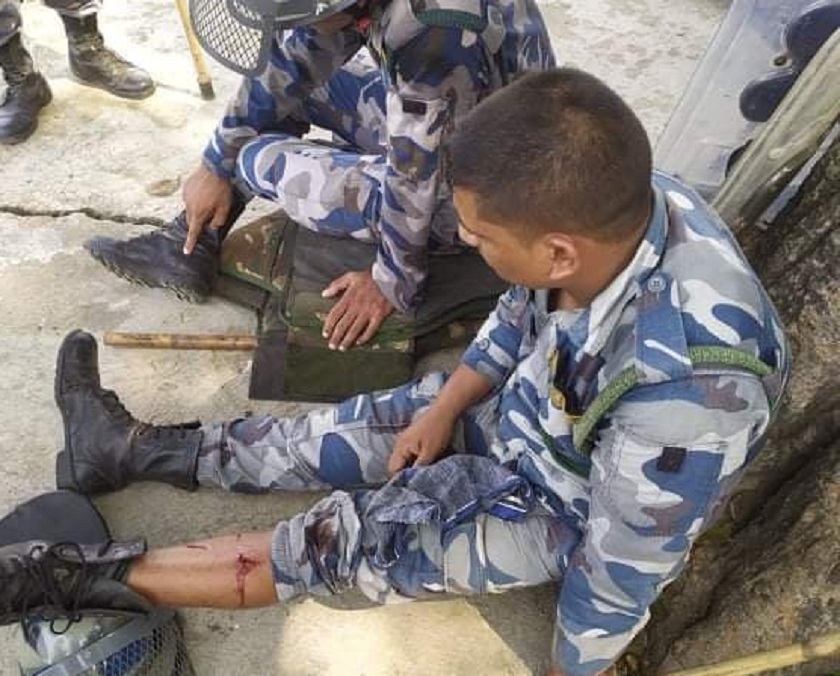 On October 10, police officers in large numbers arrived at around 5 am to where the squatters were, Ram Bikas Chaudhary of Mahuri Home said. Squatters tried to chase the police away with stones and sticks while police responded with baton charges and tear gas. It was around midday when the shooting started.

“It had been almost six months since people had started to squat in the area. Why didn’t the government do anything before?” said Dharma Budhathoki, a Motipur local. “The problem could have been resolved if they had taken swift action, but they just waited for the situation to escalate then shot people.”

Rishi Ram Tiwari, Rupandehi’s Chief District Officer, said in a video interview on October 11 that the police was “forced” to shoot people because all other measures to vacate the designated industrial zone had failed.

“More than 50 security officials were injured and the protestors even had petrol bombs. Police didn’t intend to open fire but there was no other option,” Tiwari said.

In a phone conversation with The Record on October 22, district information officer Janak Thapa said that “all that needs to be said on the issue has been said.”

Thapa did not have any comments on the fact that Birendra Kurmi and Ramesh Pariyar may not have been squatters but people were nevertheless killed.

The day after the deaths, Home Minister Bal Krishna Khand said that the industrial area needed to be protected from encroachers, and a press statement from the Home Ministry stated that “strict action” would be taken against those “illegally laying claims upon government land.” 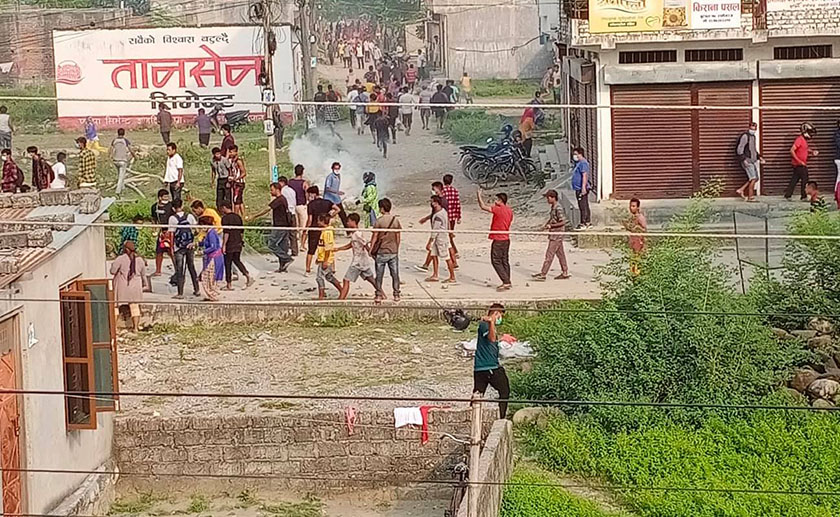 According to Ram Bikas Chaudhary of Mahuri Home, the police crackdown against people who were present at the scene of the incident is ongoing, Forty-four-year-old Sabir Ali was arrested on October 19 for his alleged involvement in attempts to “capture” the industrial area by “persuading and provoking, forming groups, forming and chairing the committee, and making banners.”

Issues regarding displacement and dispossession of people from the designated industrial zone remain unresolved, but it appears as though the events on October 10 signal a turning point in brutal measures being taken to “protect” the Motipur land as government property. The National Human Rights Commission has called for an independent investigation into the incident and compensation for victims families, as has Human Rights Watch, but as of October 23, no information about an independent investigation has been made public.

According to Sabin Ninglekhu, a geographer who has studied landlessness in Nepal, state crackdowns on sukumbasis is commonplace, whether the prime minister is Baburam Bhattarai, KP Sharma Oli or Sher Bahadur Deuba. Sadly, so is shooting with impunity, especially in the Madhes.

Two factors contributing to the clashes and killings in Motipur are important to note: (i) police open fire and kill people in the Tarai with much more frequency than they do elsewhere in the country and (ii) oversold, overhyped, evidence-free development projects, of which Nijgadh airport and Motipur Industrial Zone are both examples, are only marginally concerned with the lives of the people who may be uprooted. Whether or not Kurmi, Pariyar, and others who were killed and injured were “real” sukumbasis or not, the fact remains that they are few of the many victims of police violence that may never get justice. 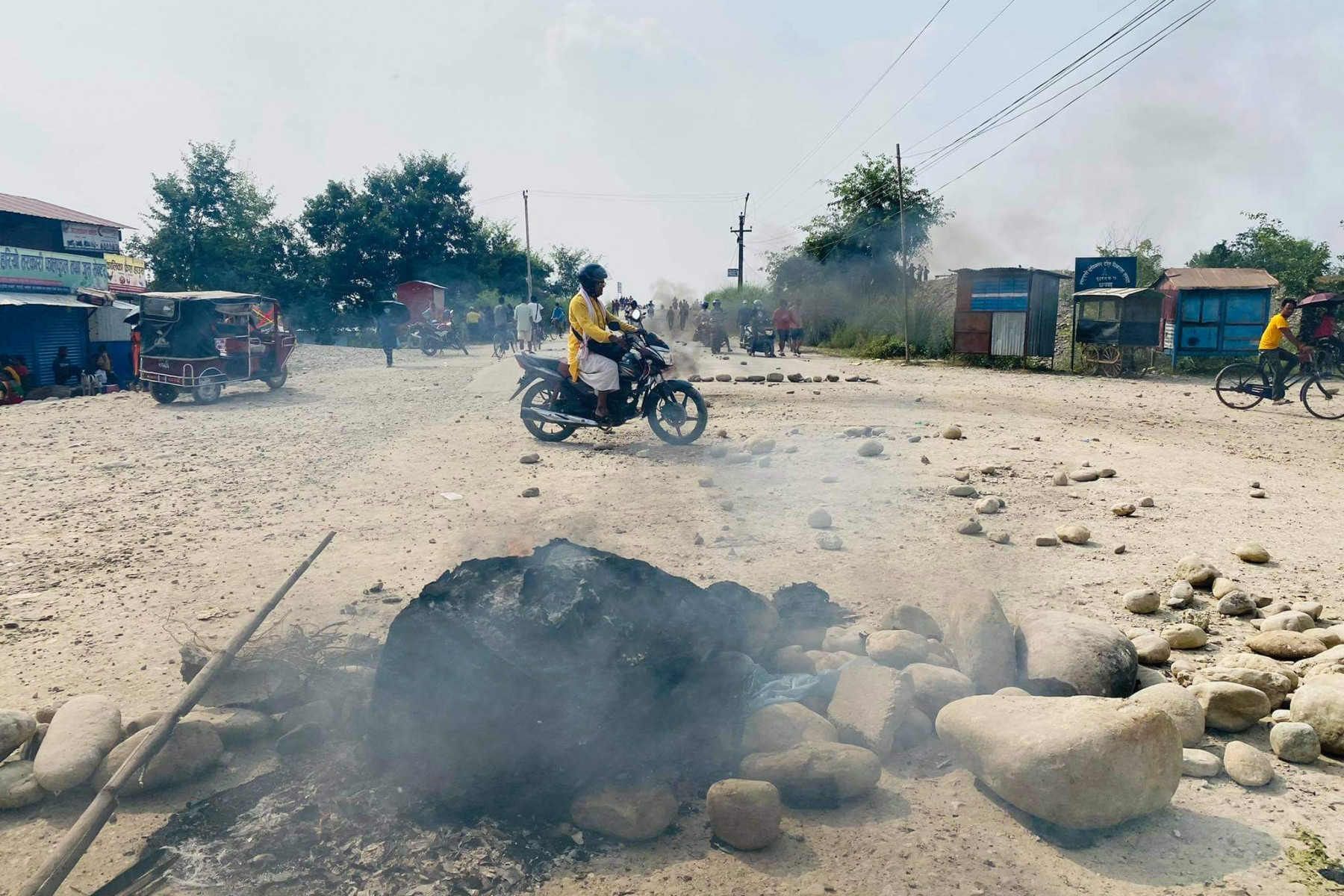 “I don’t even care about compensation,” said Bipin Kurmi. “What I am most furious about is that the police shot my brother for no reason and I haven’t even received an acknowledgment that what happened to him was wrong.”

Since coming to power, Prime Minister Oli has attempted numerous times — via ordinances — to bypass the legislation and vest the powers to make laws within himself.

Constitution continues to be controversial

3 years on, Madhesis mourn the promulgation of the statute