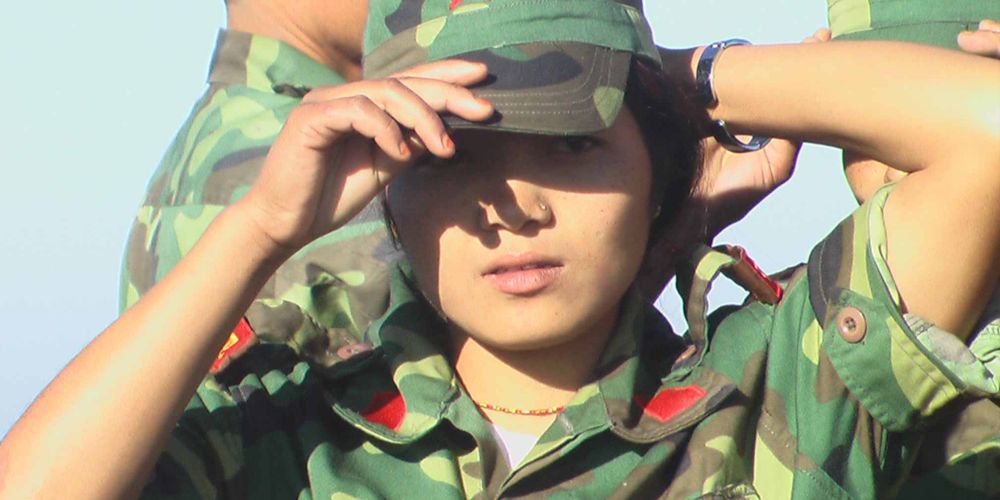 On February 13, the 23rd anniversary of the People's War, Gyanendra Gharti Magar was drinking Bhaktapure aila, reminiscing the 10-year conflict in which his family lost so much. The commemoration fell on a hapta, his day off as a brick-factory worker. Gharti Magar, 41, alias comrade Khukuri, used to be a Maoist fighter. He and his family now work in the factory at Chyambasingh, Bhaktapur.

"How can I forget People's War Day? My whole family sacrificed their happiness and dreams in the war," he said, touching the stump of the right thumb he lost in a grenade explosion. He remembered hosting Prachanda in his home in 2005. Prachanda had stayed there while returning from the Chunbang meeting where the party had decided to adopt multiparty system endorsing 'democracy of 21st century'.

"Our leaders bartered our sacrifices for power in Singh Durbar. They had no concern for how we lost our happiness, our limbs and our family members."

"Our leaders bartered our sacrifices for power in Singh Durbar."

His father mother, wife and three younger brothers–Keshav (alias Sangeet), Kishor (alias Deurali), and Prem were full-time Maoist cadres. His home of Rankot, Rolpa, was known as Kaphan Post, after his father Tul Bahadur Gharti Magar's war-time alias. Kaphan was an important junction for leaders, journalists and foreigners. Letters, personnel, and war logistics passed through Kaphan. He and his brothers had dropped out of school to join the war.

He did not get a chance to continue his formal education, and neither did he become well versed in political theory. He destroyed his personal fortunes and failed to provide education to his son and daughter, now living hand-to-mouth.

Gharti Magar had no hopes of getting a post in the party committee or government like his other comrades. He was unsure if he would celebrate People's War Day next year. He was also unsure about his personal life, his political existence and the legacy of the People's War. Prachanda-led Maoists and UML are merging on 22nd April, Lenin Day, bringing into question the rationale for the People's War and what remains of the Maoists' political ideals.

The People's War and the evolution of the Maoists has produced four generations of cadres and leaders.

Pushpa Kamal Dahal (alias Prachanda) and his contemporaries led the first generation of Maoists. They had formal education and knowledge of political theory, and could debate and defend their ideas. They led the People's War mostly from India, returning to Nepal during the final moments of the conflict, announcing a "bunker yuddha" against India. The first-generation Maoists got a chance to be at the helm of both party and state.

The second generation Maoists included Barsha Man Pun (alias Anant) and his contemporaries. They led the People's War from the fields of Nepal, developing a political career through class struggle from their youth. While they did not have the same formal education and theoretical base as the first generation, they did get to enjoy party and state power.

Comrade Khukuri and others like him represent the third generation, the largest division among the four. Most leaders and cadres who were killed, disappeared or injured are from this generation. Khukuri and his contemporaries were products of class struggle. They established themselves neither in society nor in the party.

Cadres of Narayan Kaji Shrestha's party, UML, and other fringe leftist parties, who joined the Maoists after the peace process, make up the fourth generation of Maoists. They did not have to lose life, limb or property, unlike the generations that came before them.

What do the Maoists fear?

Cadres and leaders are also concerned about the asymmetry in connections and knowledge between themselves and the UML. While UML cadres are well versed in politics inside and outside the party, Maoists are relatively new to parliamentary politics. The Maoists also lag behind the UML in terms of formal education and socialization outside their own party.

Compounding this inequality is their minority status in the left alliance. The left alliance had a 60-40 ticket distribution among UML and Maoists in the election, and the majority of the winning candidates were UML. This 60-40 distribution also applies to the internal election that will happen post-unification, making the Maoists unable to compete with the UML. Given these circumstances, Maoist cadres question how much space they will get in the unified party. "We are not hopeful about what we will get. Only the leadership elite—who enjoy power and resources—will benefit," said youth leader Lekhnath Nyaupane, a third generation Maoist.

Beyond the issue of political survival are fundamental questions of morality and ideology: were the sacrifices made during the People's War merely for the sake of merger with the UML and a seat in parliament? What has become of the Maoists' commitments made during the war period? Having shown their followers the promise of upliftment which did not materialize for many of them, Maoist leaders lost the moral ground.

Were the sacrifices made during the People's War merely for the sake of merger with the UML and a seat in parliament?

Maoist supremo Prachanda himself is going into the merger as co-chairman of the new party. Prachanda's most loyal followers will join him in the UML. Another segment of leaders and cadres will form a new party or join other existing communist parties. Large numbers of lower-rung Maoists will join the Biplab-led party. Others will follow Lokendra Bista Magar, Gopal Kirati (Sainla) or Bishwabhak Dulal (Aahuti), who have already left the Prachanda-led Maoists. The remaining will step off the political stage and go back to their personal lives.

The Maoists' identity will stay intact post-merger if they face antagonism from the UML. Otherwise, they will diffuse into UML's various factions. In this unification, the UML is the ocean and the Maoists are the river. Nowhere is the river seen in the ocean.

Nabin Bibhas  Nabin Bibhas has worked as a journalist for a decade, and closely follows Nepal's politics. He is the author four collections of essays, poetry, and short stories. He tweets @NabinBibhas

The geo-politics of a river.