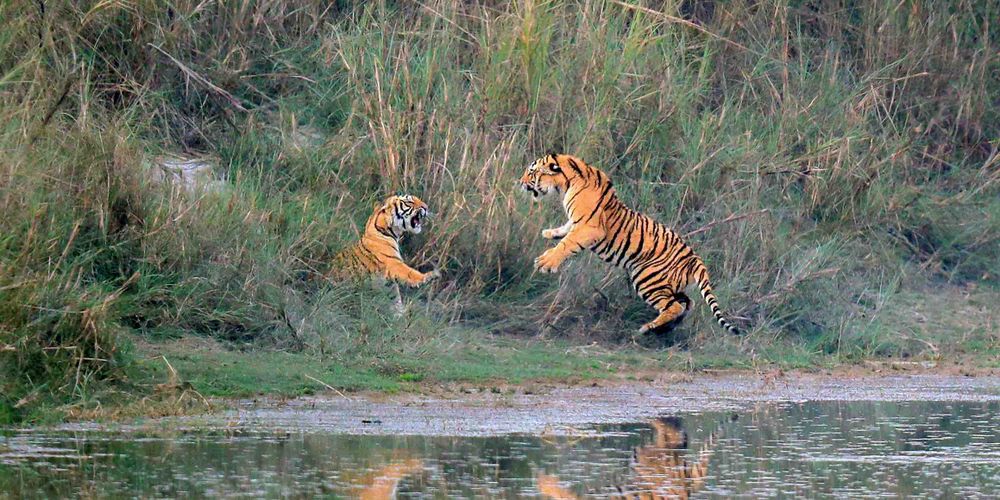 The wild tiger population in Nepal has risen by  nearly 20 percent in just four years. The numbers seem impressive: Nepal is home to an estimated 235 wild tigers in 2018, compared to 198 in 2013, the third nation-wide assessment of wild tigers released in September revealed. The first and the second national-level tiger counts were carried out in 2009 and 2013 and estimated 121 and 198 tigers respectively.

The tally in 2018 shows that coordinated conservation efforts undertaken in recent decades appear to be working in the country to some extent. Out of five tiger-range protected areas, only Chitwan National Park (CNP), the country’s first and largest tiger reserve lost 27 tigers between 2013 and 2018. Bardiya National Park (BaNP) in Western Nepal, the second largest tiger habitat recorded the maximum gain in the same period, along with other remaining habitats including Banke National Park (BNP), Parsa Wildlife Reserve (PWR) and Shuklaphanta National Park (SNP).

With Nepal on target to complete the sloganistic doubling of tigers as determined at the St Petersburg Tiger Summit in Russia in 2010 by the time of the next 'year of the Tiger' in 2022, the success of BaNP in almost doubling its tiger numbers from 50 in 2013 to 87 in 2018 cannot be overstated. The first nationwide tiger count carried out in 2009 recorded only 18 tigers in BaNP.  Nearly a decade later, Bardiya-Banke complex (Bardiya adjoins Banke National Park ) in western Terai flood plains has recorded one of the highest growth rate of tigers in the country and announced itself as a crucial habitat in the global effort to protect the great striped endangered cat from extinction.

BaNP’s track record with tiger numbers, since the launch of Global Tiger Recovery Programme in 2010 by 13-tiger range countries including Nepal has been encouraging, thanks to joint efforts in habitat management, improved habitat connectivity, increased community-led anti-poaching initiatives and effective law enforcement.

As an umbrella species, the tiger has been the main focus of increased anti-poaching initiatives, which are joint efforts from BaNP authority, security and intelligence agencies including Nepal Army and Central Investigation Bureau of Nepal Police, Community based Anti Poaching Units (CBAPU), as well as inputs from numerous other stakeholders including the National Trust for Nature Conservation and WWF Nepal.

“The road to success has been arduous and full of challenges, but truly satisfying,” said Ramesh Thapa, former chief conservation officer of BaNP, who worked in this protected area for nearly two and half decades in different capacities.

Key interventions that have led to this success in conservation include; effective and coordinated patrolling, habitat management of prey and predators, grassland expansion and management, better habitat connectivity, building of water ponds in water scarce areas,  effective law enforcement, and arrests of kingpins and middlemen.

“The willingness of the local community to help protect wildlife by managing the key wildlife corridors, allowing for smooth wildlife movement, was a key factor,” Thapa said.

Habitat management was done by improving the state of existing wetlands and grasslands as well as  setting up new water courses powered by solar technology, which in turn provided a favorable habitat for major prey species like swamp deer, spotted deer, wild boar and barking deer. Forty ponds were built in different strategic locations within two years to ensure water availability for both predator and prey species especially during dry season inside the park. In addition to habitat management inside Bardiya, the establishment of Banke National Park in 2010 that borders Bardiya and provides a key habitat linkage for big cat species was crucial.

This resulted in increased tiger density (presence of tigers per 100 square kilometers) from 0.94 in 2008 to 3.38 and 4.47 in 2013 and 2018 respectively.  The findings of a research study titled ‘Estimating tiger and its prey abundance in Bardiya National Park’ published in 2016 showed the presence of average 50 prey species per year per tiger in various parts of BaNP. This suggested that the protected area has ample prey species to support a larger population of up to 100 tigers.

“We took tiger conservation seriously and without the overwhelming support of local communities, we would not have achieved what we have now,” Thapa stated.

The CBAPUs with membership of over 2,500 throughout the district is the biggest strength in terms of human resources and conservation activities in Bardia. The members of the Unit have been mobilized frequently to carry out monitoring and patrolling against poaching outside protected areas, to combat illegal wildlife trade and to increase conservation awareness. While Nepal Army and park authorities took the responsibility of  protecting wildlife from poaching inside protected areas, the members of CBAPU were responsible for buffer-zone areas, community forests and park fringes.

Remembering the early days of patrolling, back in the late 90s before the CBAPU was officially formed, Raju Thapa was one of a small group of local individuals who started patrols when the army became preoccupied during the ongoing insurgency.

“We had nothing,” said Thapa, who now co-owns Samsara safari camp in Bardiya and provides guiding services in the area.  “We were able to use rafts when we were not on foot and if we were lucky we would be given a packet of noodles. They were hard days but the effort was worth it because it showed that locals could be responsible for protecting wildlife.”

As a guide who is frequently in the national park he gets a constant feel for the health of the habitat especially with regard to water.  “The Karnali floodplain is a very important area for all animals. Currently there is pressure on water resources because of the need for farm irrigation.  The park has done a good job increasing the number of water holes which can be fed using solar pumps but there is concern that certain areas are becoming too dry.”

One of the key roles played by CBAPU is addressing the emerging threats resulting  from human-wildlife conflict. There are sporadic incidents of tigers attacking and killing livestock and humans.  Members of the local community sharing proximity with the park are among the first casualties of tiger attacks and injuries so it has become imperative to ensure that wildlife and human both thrive within the same landscape.

“Poaching is always a threat and human-wildlife conflict is also an ongoing challenge we always have to be ready for. We cannot afford to relax and it is important to keep improving our structure so as to face the challenges ahead,” said Hemanta Acharya, chairperson of one of the CBAPUs in Bardiya.  Considering the need to act promptly to address human-wildlife conflict, the CBAPU has formed Rapid Response Teams (RRT) responsible for being the direct link with communities in case of emergencies. The teams act as quickly as possible and then inform the appropriate authorities if further assistance is required.  Call outs can involve species such as elephants and leopards. The goal of RRTs is to ensure safety for both humans and animals according to the situation.

CBAPU is working closely with the communities so that they understand that the more prey there is in the forests the less chance there is of conflict with tigers and leopards.  “Everyone needs to know that every deer and wild boar is important, these animals cannot be hunted,” Acharya said.

In addition, strengthened networks against poaching and poachers has paid off. As many as 133 absconding poachers, kingpins and middlemen acquitted in wildlife poaching and trade were arrested by the authorities.

The arrest of Sher Lama, a kingpin of eight national and international networks involved in poaching and illegal wildlife trade and Lal Bahadur BK who was involved in killing country’s first-ever radio collared tiger inside Bardiya were among the key achievements that helped to secure tiger population in BaNP and adjoining forests.

Tiger skin and other body part seizures are still occurring in Nepal showing that the poaching problem still exists.  The Tiger Genome Project run by the Kathmandu-based Center for Molecular Dynamics Nepal is another valuable tool in helping understand the issues and DNA tests of tiger body parts have shown that Bardiya tigers have been recent victims.

Besides addressing poaching, it is very important to maintain and protect habitats to allow these species to move and hunt their prey. The loss of habitat, that doesn’t only mean the core protected areas and adjoining jungles, but also the isolated forest areas with roads, human settlements and farms--- serve as  an important corridor allowing wildlife to disperse more freely--is another key threat to the survival of tigers. To overcome this, the park should focus its efforts on maintaining biological corridors like the three-kilometer-long Khata corridor joining Bardiya with Katarniaghat Wildlife Sanctuary, improve connectivity and provide a landscape linkage between one or more tiger habitats like ( Banke National Park).

Lastly, it is local community that has the big role to play. CBAPU Chairman Acharya warns that increased capacity of the community members is fundamental to sustaining and increasing the tiger population.  “We cannot afford to relax and it is important to keep improving our structures so as to face the challenges ahead,” Acharya said.

Pragati Shahi  Pragati Shahi is an independent writer who has nearly a decade long experience of working with print and digital media at national and international level. Her features have appeared in several international media including Devex, IRIN, Time, The Atlantic, Public Broadcasting Service, Broadly and UCANews.