Hundreds of foreign-bound workers are flocking to Kathmandu, scrambling to get vaccines and receive verified vaccinated certificates, only to be lost in a mismanaged system. 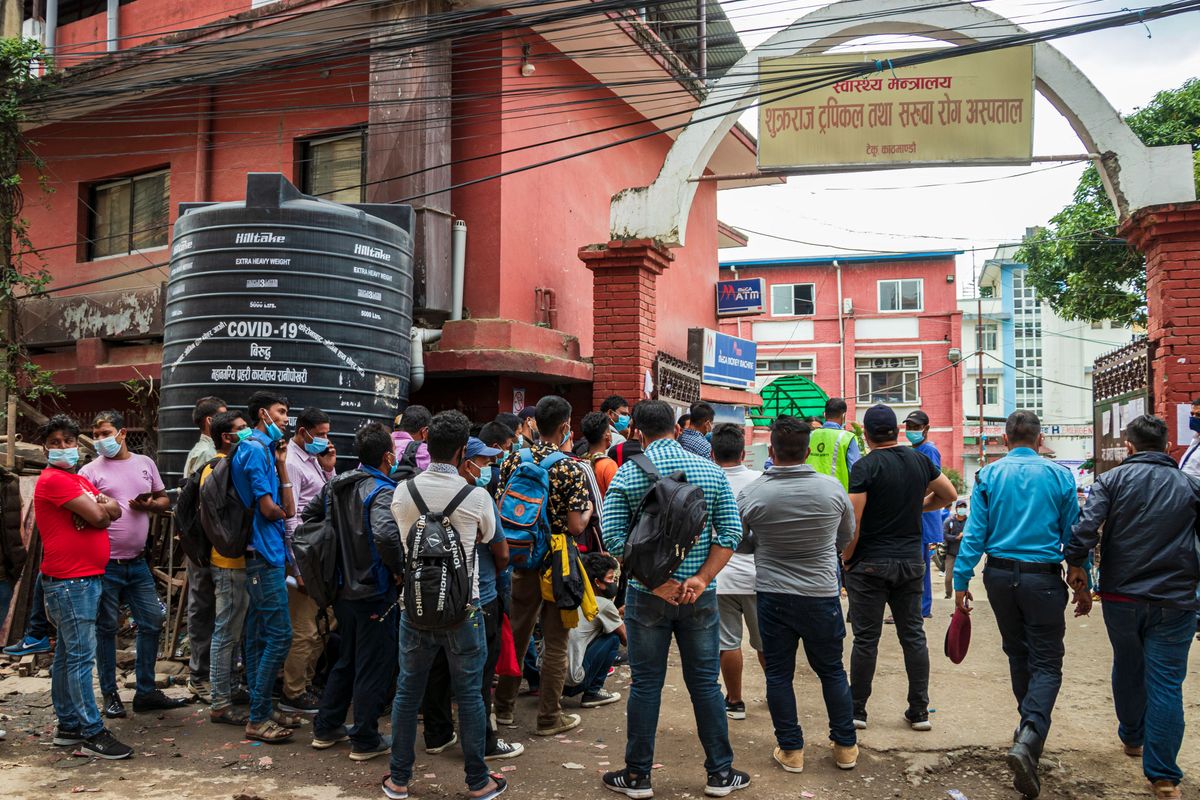 On Thursday, as sweat trickled down his forehead, Hukum Ansari stood in line at the Sukraraj Tropical and Infectious Disease Hospital. The 36-year-old from Birgunj had been waiting in line for three hours at the Teku hospital, along with hundreds of other migrant workers, to get his vaccination card attested so that he could fly out to Qatar as soon as possible. 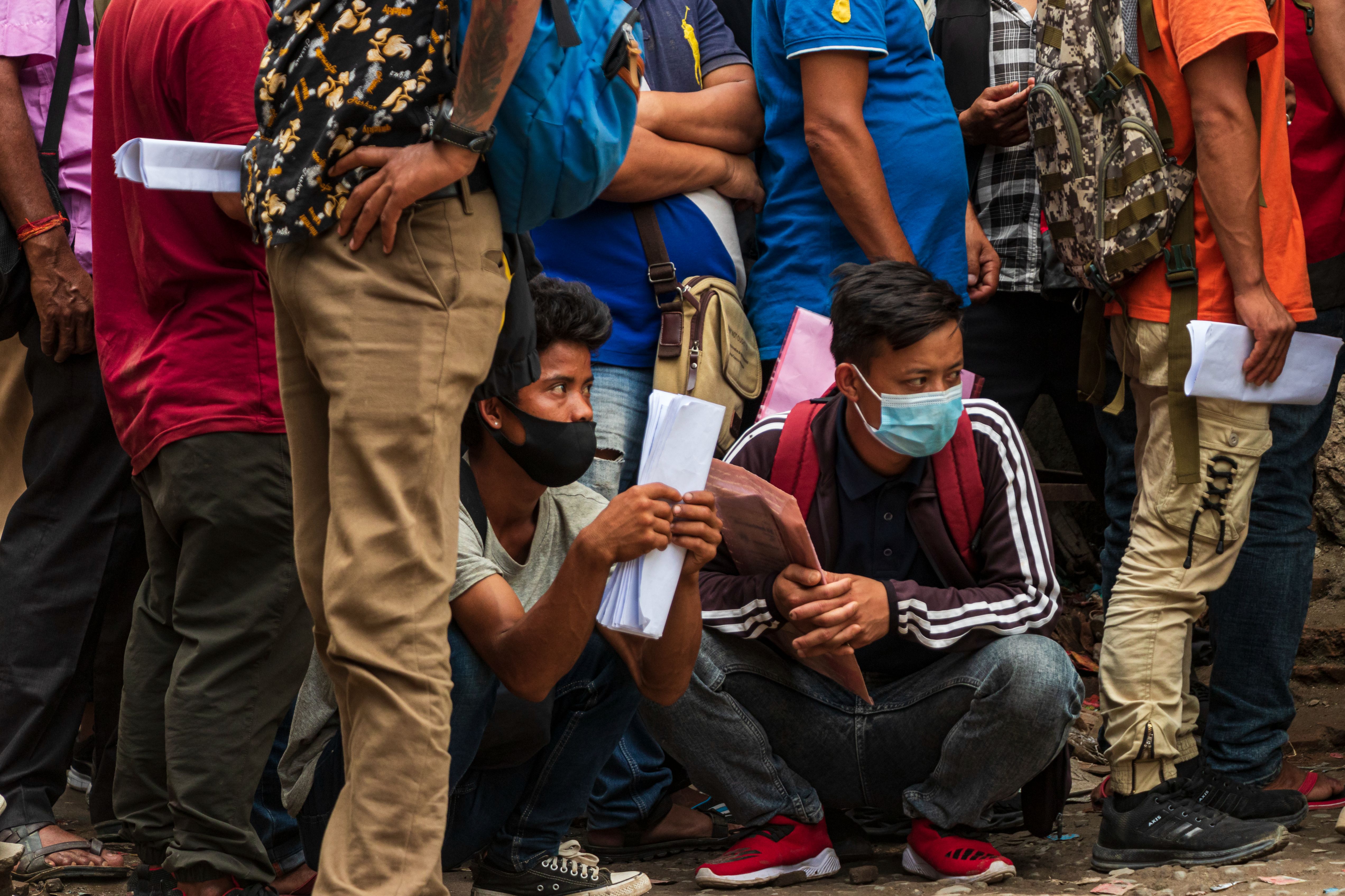 “I have been coming here for the last three days, but have not had the chance to get my documents attested. The company I work for has said that I need to first finish all the documentation procedures before they send me my plane ticket,” said Ansari. “I have already missed a flight because I could not get my documents verified on time. I cannot afford to do so again.”

Ansari is among the thousands of migrant workers who have been scrambling to get vaccinated and receive verified vaccination certificates to travel abroad. Most labor destination countries — like Qatar, Kuwait, Malaysia — that had closed their borders in April after the arrival of the second wave of the pandemic are finally reopening to migrant workers. But the countries have a major requirement: migrant workers need to be vaccinated and need to carry with them their government-verified vaccine certificate. But similar to the government’s vaccination campaigns, this process too has been chaotic. 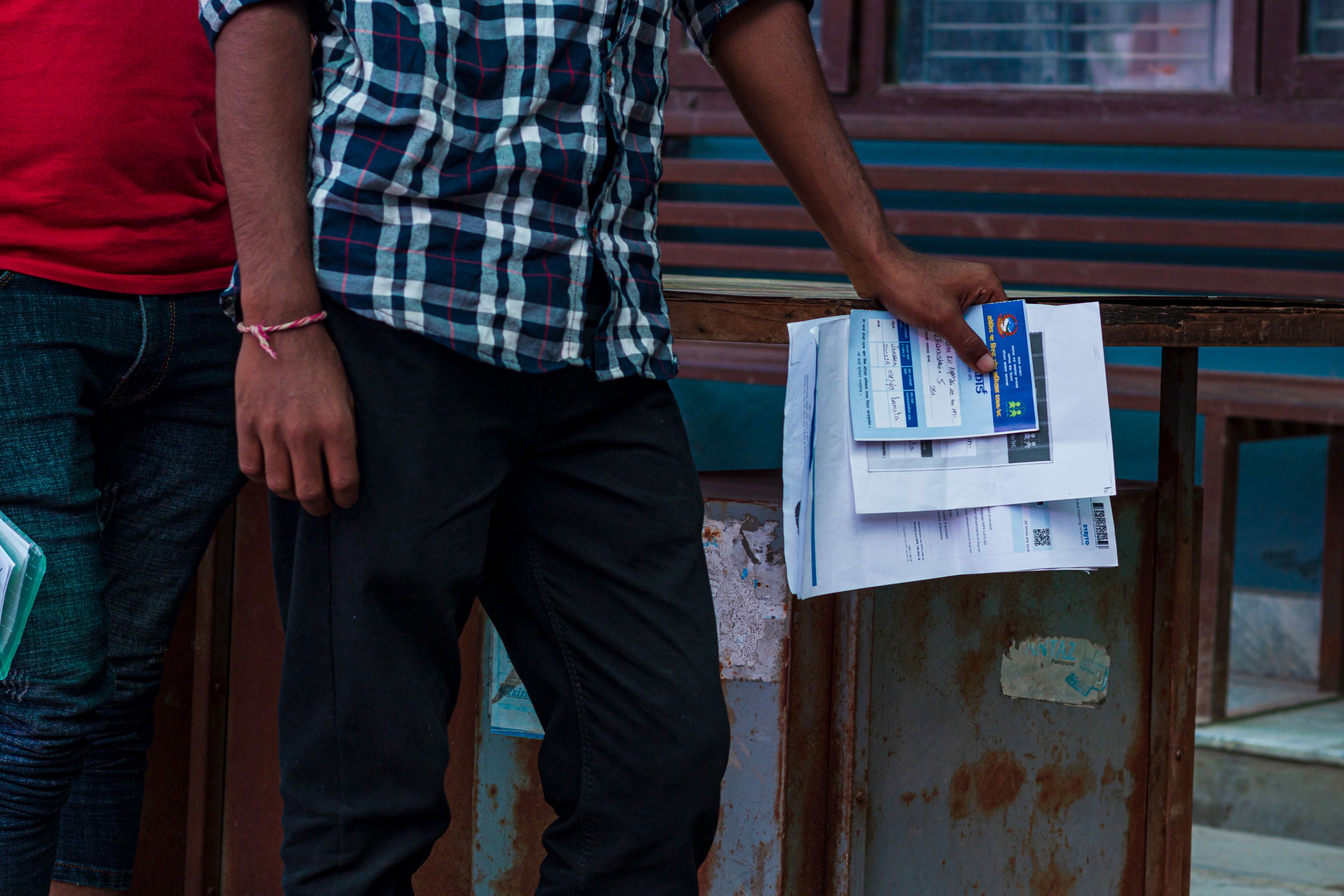 Take the August 5 morning when Ansari stood in line at the hospital as an example of how chaotic things are. Many migrant workers were getting their vaccine certificates approved on the same day they were supposed to fly out.

“My document just got approved,” said 22-year-old Suraj Maharjan, a resident of Bhaktapur. “My flight is scheduled for 11 pm tonight. I would have preferred to spend some quality time with the family before leaving, but I have to hurry back home, pack, and then head straight to the airport.”

There was also confusion regarding who would be prioritized. Authorities at the Teku hospital initially announced that only certificates of people having flights on August 5 and 6 would be attested for the day. After hearing the news, many others who had been waiting in line for hours left disappointed. But a little while later, authorities announced a change of plans: documents of people whose flights were scheduled for beyond August 7 were also going to be approved. But almost everyone with later flight dates had already left the hospital by then. 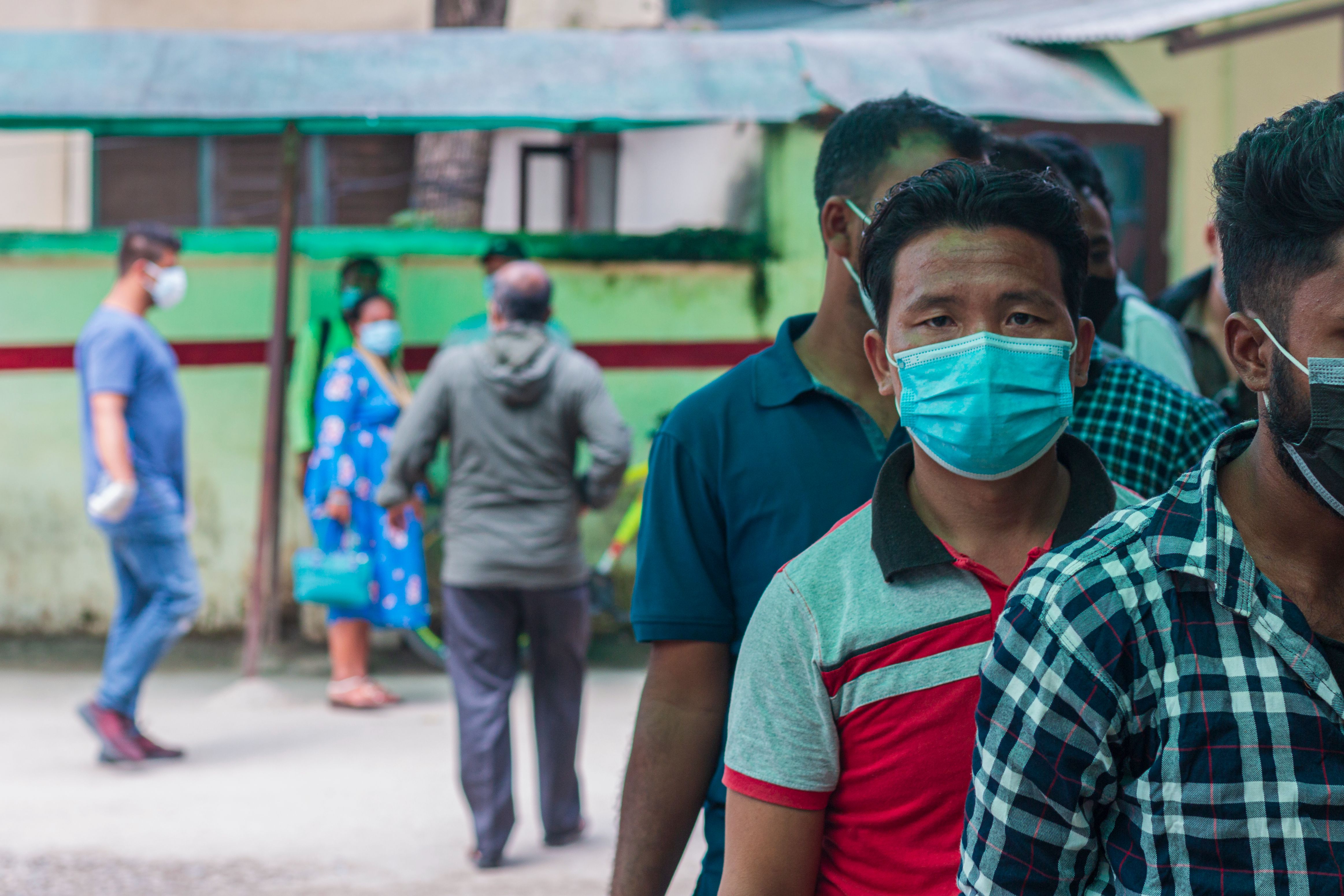 In an effort to make things easier for migrant workers, on August 1, the Ministry of Health and Population issued a notice calling on all government hospitals with more than 50 beds to start providing verification certificates.

“District hospitals should immediately follow the instructions issued by the ministry. We need to prioritize this,” said Dr Anup Bastola, director of the Sukraraj Hospital.

But that has not happened yet.

“It would have been easier if district hospitals could offer this service. I would not need to come to Kathmandu all the way from Birgunj and spent my money on travel and accommodation when I still have to pay for the canceled tickets,” said Ansari. “I called up many other hospitals as well but none are providing the certificate.”

Ansari is not suffering alone. Twenty-eight-year-old Tek Raj Poudel, who has come from Agarkanchi to Kathmandu, has a similar plight.

“I have already taken out a big loan to go to Saudi Arabia. I am already drowning in my expenses and traveling to Kathmandu is adding to my expenses. The confusing procedure is not only taking a toll on me financially but also adding to my stress. These last few days I have before I fly out, I would have preferred to spend them with my family rather than wait in line like this,” said Poudel.

All this chaos can be traced to the government’s lack of planning. For months, migrant rights activists and organizations have been urging the government to prioritize vaccinations for outbound migrants, but little came of it. 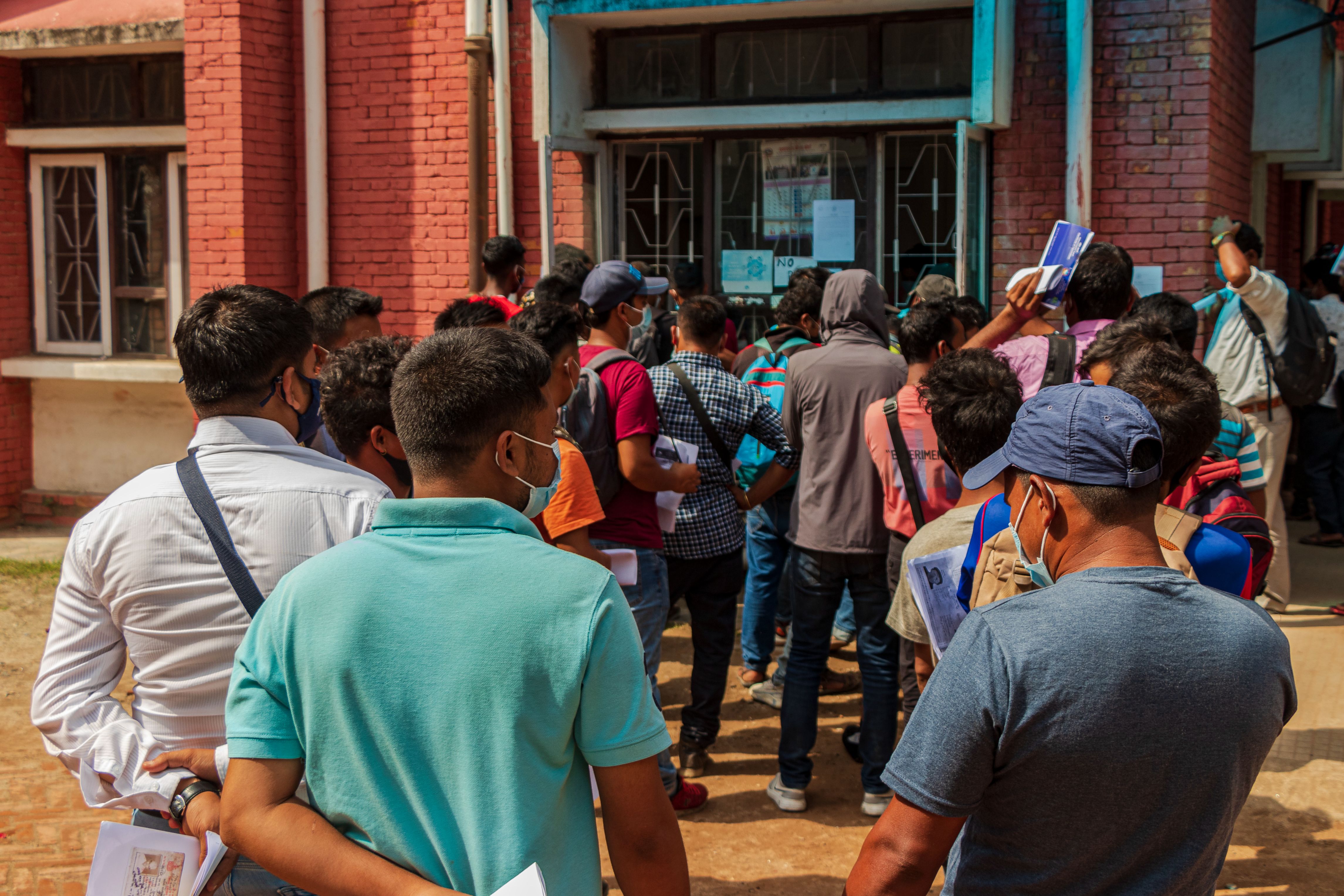 It was only on July 19, with the arrival of the 1.5 million doses of the one-shot Johnson & Johnson vaccine, that the government decided to inoculate migrant workers. The J&J vaccine would be given to migrant workers who have to fly out within a month while those who do not have to immediately leave the country would be given the Chinese Verocell vaccine, which requires a second booster dose.

Nepal received a little over 1.5 million doses of the Johnson & Johnson vaccine from the United States as grant assistance through the World Health Organization-backed COVAX facility. The vaccines arrived in Kathmandu on July 12. Authorities started administering the single-shot vaccine from June 19 in the Kathmandu Valley, targeting those aged 50 to 54 years as well as migrant workers. The Verocell jabs being administered to migrant workers are from among the 4 million doses that Nepal purchased from China’s state-backed pharmaceutical giant, Sinopharm. But just getting the jabs is not enough. Many countries do not approve of the Verocell vaccine, which is what a majority of the population has received.

There has been some relief for migrant workers. According to a report in The Kathmandu Post, on Sunday, the Department of Consular Services, which had been attesting the vaccination certificates issued by agencies under the Health Ministry, said that Nepalis planning to go abroad are not required to get an attestation from the department henceforth. 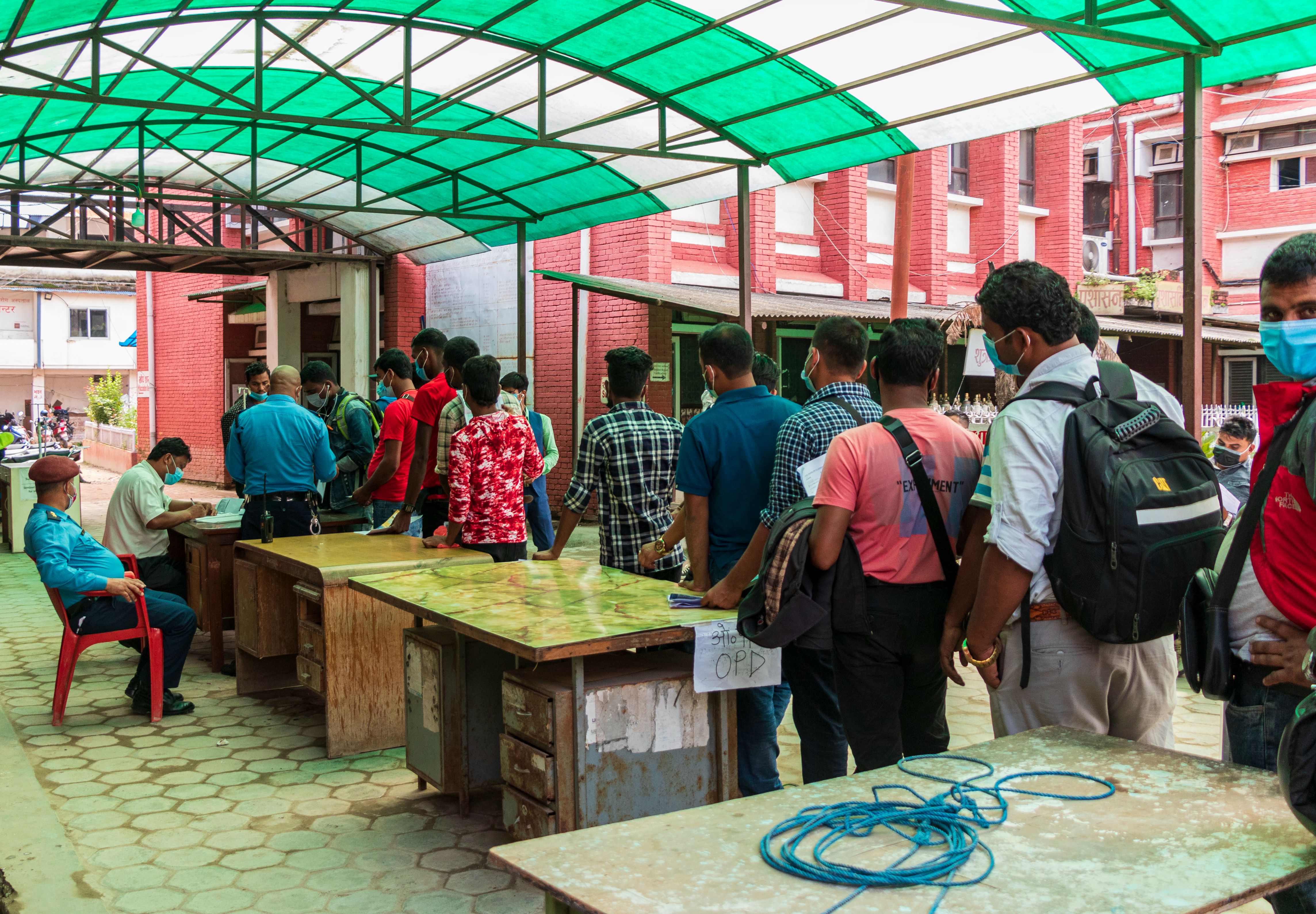 Likewise, on August 4, the Health Ministry issued a notice stating that outbound migrant workers can submit applications online along with required documents for QR-coded-vaccination certificates. Besides, those who are unable to apply online can submit their applications at the National Ayurveda Research and Training Centre at Kirtipur, the notice says.

“We are doing our best to manage the procedure and ensure that no one’s flight gets canceled. We are hoping the digitization of the process will make it faster and easier. For now, we are prioritizing the documents of people whose flight is scheduled within 48 hours,” said Bastola.