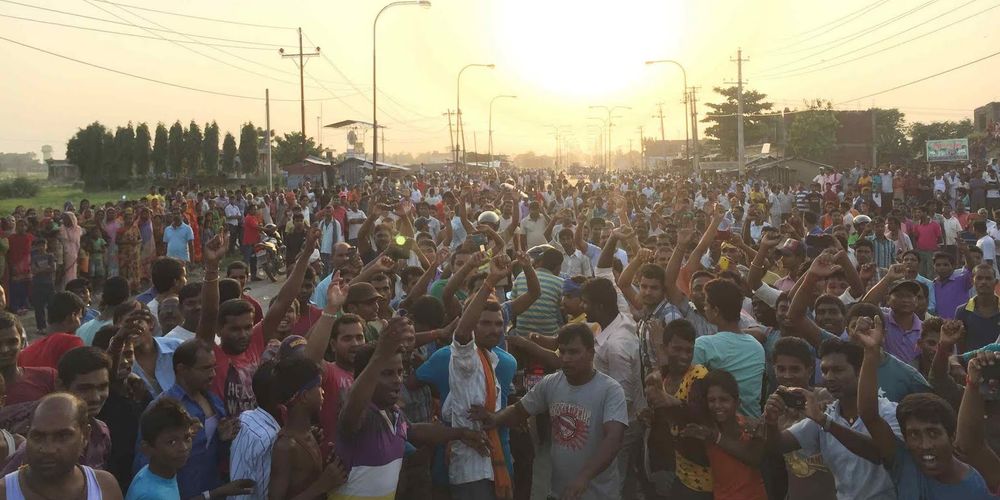 As Kathmandu celebrates the arrival of a new constitution, the situation in the Terai remains tense with continuous demonstrations, curfews, and bandhs. To learn more about the human rights situation in the Terai and the demands of the agitating groups, Erisha Suwal spoke with Mohna Ansari, a spokesperson for the National Human Rights Commission of Nepal.

This transcript has been condensed and edited.

What is the human rights situation in the Terai-Madhes?

It’s not normal. Everyone is affected and nobody is happy with what’s happening. We at the National Human Rights Commission are talking to the protesters to engage them in dialogue with the government.

What is the nature of the protest?

Protesters say that they are protesting peacefully for their rights. But some have been very violent, like in Tikapur. They do carry sticks, which they say are symbols of protest, something they use every day and people shouldn’t be scared of.

They claim it’s peaceful, but almost 45 have died. How is this possible?

Peaceful protests turn into confrontations with the Armed Police Force personnel under two circumstances. First, when the protesters want to enter restricted areas, and second, when they try to block trucks ferrying essentials goods. They think doing that will make their movement successful. Although they are mostly peaceful, there are incidents where protesters have carried petrol bottles with the intention of attacking security personnel. This was not the case in the beginning. But violence escalated after protesters were killed. Nine to ten people were dying in a single day. Some families lost their sole breadwinners. Students and minors under 16 have also lost their lives. This enraged the people. The security forces are responsible for this.

Are the security forces violating human rights during these protests?

The security forces, too, claim they have been peaceful, but then people are getting killed. When protesters have broken into restricted areas, the APF has fired [live] bullets instead of using less lethal crowd-control measures. Yes, security forces can fire for self-protection, but even minimum procedures of quelling violent protests have not been followed. Police have entered hospitals, fired their weapons, and beaten people. We saw bodies of people who had been shot above the waist. Many minors have died. These actions are unacceptable.

How will the security forces be held accountable?

The National Human Rights Commission is monitoring the situation and will carry out investigations. Disciplinary actions or prosecutions can then be carried out based on the findings. Right now we are looking at how national laws have been violated, but Nepal also has international obligations.

How should the government engage protesting groups?

They should be engaged as soon as possible. A political solution must be found through dialogue, not through mobilization of security forces. The government did not hold talks even after people had been protesting for a month. The situation worsened, and people keep getting killed because there have not been meaningful talks.

What will happen if dialogues do not occur?

The parties say they will continue protesting, but this is also the same land where there were once many armed groups who sought political answers through violence. Such groups are now reviving and organizing themselves. Some say they are open for talks, others have threatened to carry out attacks. We are concerned that although the movement is political, criminal elements could join the protests. In other parts of the country, other minority groups such as Limbuwan and Magarat are also coming together. We have tense times ahead, similar to the Maoist conflict and the Madhes Aandolan.

The constitution has been promulgated despite protests. How legitimate is it?

It is legitimate because it has come through a democratic process. However, many groups feel they gained nothing. They have been protesting for almost 45 days, which has increased the distance between them and mainstream political parties. Dialogue to address their demands has still not taken place. The protesting minorities—Madhesis, Tharus, Janajatis—should be brought on board if all Nepalis are to own the constitution.

What is the government doing to bring protesters on board?

The government sent a letter to Madhesi political parties two weeks ago. It was not a request to sit for talks. It was more of an order that said the parties should come for talks within two days. The language did not help to build trust and confidence. Also, the government cannot invite opposing forces for dialogue through the media. It has to approach them and gain their trust.

So what needs to be done to bring them on board?

The civil war ended through talks. Maoists were invited to the negotiating table with due respect. Similarly, the protesting Madhesi and Tharu parties should be invited to the table with due respect in order to build confidence. A dialogue committee should be formed. The Madhesi parties are demanding that previous agreements be respected and implemented.

Do the protests mean a rejection of the constitution?

Most of the people protesting do not reject the entire constitution. Madhesis feel betrayed as they were left out of the process. During the 2007–8 Madhes movement, 54 Madhesis died to bring the agenda of federalism to the political center stage. They were initially part of the committees that were involved in drafting the constitution. But they left. They felt demoralized after the big parties started imposing everything because they had two-thirds majority.

Why has the government failed to find a solution?

It has failed because of its superiority complex. People in the Terai want to live in peace. They want respect. It’s harder on the new generation, which feels lost. They feel there is no place for them in this state.

Non-Resident Nepalis embody the diversity and pluralism of Nepal and its polity.