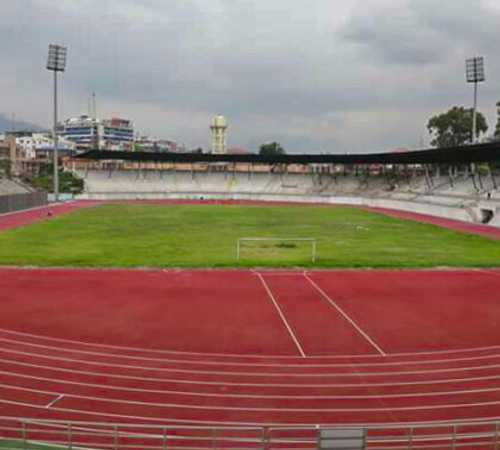 When construction on it started in 2016, the Chitraban Stadium had raised a lot of hopes among locals and sport enthusiasts in Chitwan and beyond. The project, with an estimated budget of NRs 1.7 billion, was planned as a multipurpose stadium capable of hosting around 17,000 people, and it was to have a football ground, and track and field facilities for numerous other sports.

Four years later, the fate of the stadium--which is being built on 17 bighas of land provided by Bharatpur Municipality--remains shrouded in a cloud of uncertainty due to a budget crunch and because a similar but much larger stadium is being planned in the vicinity.

As of now, hardly one-third of the work on the Chitraban Stadium has been completed. The project has received only NRs 15 million since last year, most of which is being used for the construction of its boundary walls. Surendra Gurung, chairman of the stadium’s construction committee, said that the crew still have not started work on the parapet and the main ground due to resource constraints. Gurung doesn't know how long that work will take given the shrinking budget and the changing priorities of local leaders.

Furthermore, Nepal Communist Party Chairman Pushpa Kamal Dahal, during whose premiership the building of the stadium kicked off, and his daughter, Renu Dahal, who is a mayor of Bharatpur Municipality, now seem to be more invested in the Gautam Buddha International Cricket Stadium (GBICS), which is being planned around 3km away from the Chitraban Stadium, in Naya Bazar.

GBICS is a mega project undertaken by the Dhurmus Suntali Foundation, a not- for-profit organization run by comedian couple duo Sitaram Kattel and Gunjana Ghimire, with money raised by the government and non-governmental stakeholders. The couple have already raised millions of rupees for the stadium, which will be able to host 30,000 people, and they are already conducting the environmental impact assessment of the proposed site in Rampur.

GBICS will also be a multipurpose stadium designed to host cricket and football matches. Chitraban officials suspect that the inclusion of a football ground in the GBICS plan could further shrink Chitraban’s budget and hinder its work indefinitely, as was the case with Tikauli stadium, which saw its construction halted after it was inaugurated.

“Why waste money on yet another football stadium in the vicinity when another project is already running far behind schedule due to budget constraints?” a Chitraban official said. “Moreover, there is also no guarantee that GBICS will not face similar delays, as they are also struggling to raise money.”

Despite organizing a door-to-door campaign and a mahayagya and appealing for support from government and non-governmental organizations within and outside the country, the Dhurmus Suntali Foundation appears nowhere near raising the estimated NRs 3 billion required to complete their project.

The tussle between the two stadiums is a classic example of what happens when a development project is decided not on the basis of necessity or adequate planning, but on the whim of a few individuals.

After suffering decades of neglect, the sports sector in Nepal is seeing an unprecedented growth spurt, with massive investment in infrastructure. All three tiers of government have been announcing major stadium projects one after another. Besides the two stadiums in Chitwan, at least a dozen major stadiums are being built across the country, including in Pokhara, Gulmi, Sindhuli, Dang, and Sindhupalchok, while local bodies are spending millions of rupees on countless smaller projects.

These projects have led to unhealthy competition among stakeholders to build stadiums, resulting in duplication of projects. Such ill-planned projects have been costing taxpayers and donors billions of rupees even though only a few of them actually see the light of day.

Several big projects, such as the cricket stadium in Mulpani, have been languishing for decades for lack of budget, although the government continues to sanction many such projects.

The ongoing competition among local bodies is not a new phenomena: development work in Nepal has long suffered from a sheer lack of imagination, planning, and political will and bad governance. The budgets, programmes, and policies of most local bodies are almost identical because the developers lift programme designs from each other, without any regard for local needs and the ground reality.

Such competition and replication of projects have only led to the misuse of public money in haphazardly created, bloated development projects. Before building stadiums became all the rage, most local bodies were spending precious resources on the construction of viewing towers. And before viewing towers started trending, local bodies across the country were funneling large chunks of their budget on buying cranes and bulldozers for the construction of roads. The haphazard construction of roads, including in areas without the need of a road, has been chiefly blamed for the rise in the number of landslides in recent years.

The unchecked spending of public money in needless projects like roads and viewing towers has prevented local bodies from investing in areas that matter most--like health, education, and social welfare.

In Bharatpur, which might soon have two national-level stadiums and smaller stadiums in nearly every village, thousands of farmers continue to spend hours in queues to buy chemical fertilizers. That the government--instead of focusing on helping the people lining up to get on with their livelihood--continues to prioritize the building of stadiums says so much about how out of touch it is with the people’s real problems.