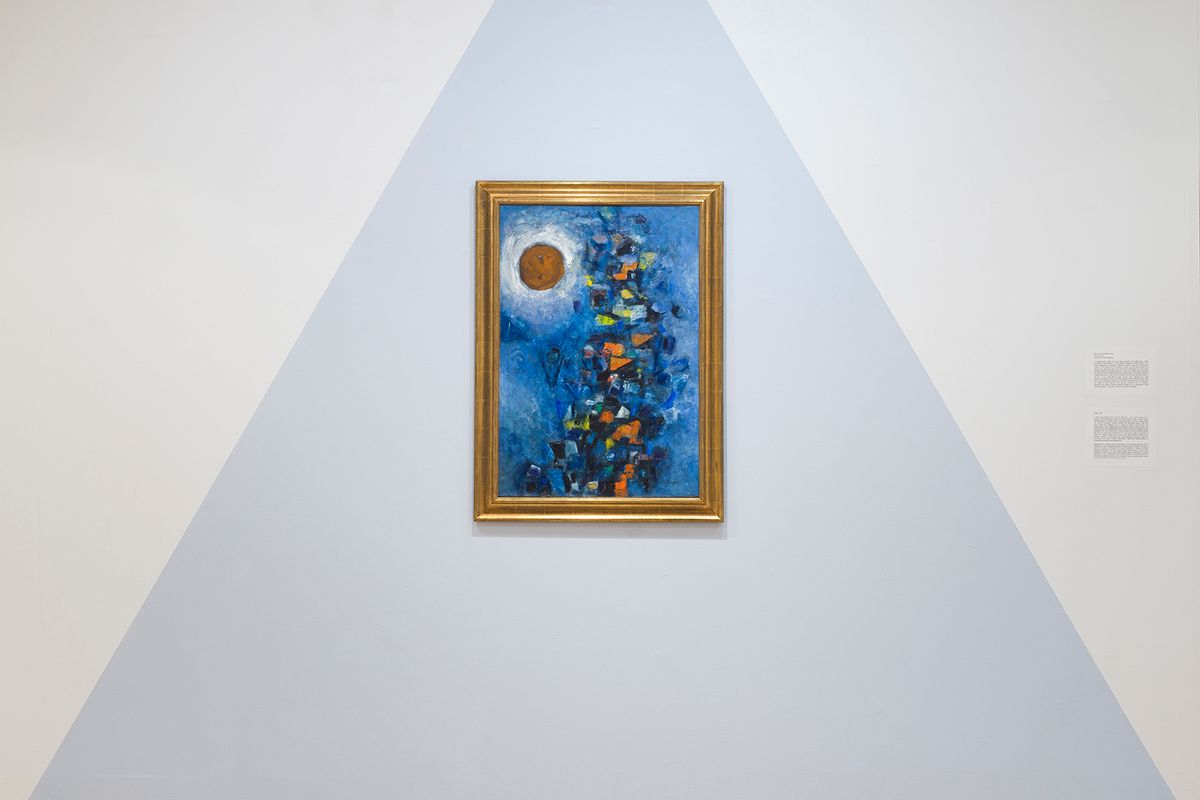 A new exhibition of the late Lain Singh Bangdel, Nepal’s pioneer of cubism and abstract expressionism, has opened in Queens, New York City.

The exhibit, which will show at St. John University’s Yeh Art Gallery through April 9, tracks Bangdel’s development as an artist and his adventures in pre-independence India, post-war Europe, and Panchayat-era Kathmandu. In many ways, Bangdel’s life was as remarkable as his art.

“Lain was just an amazing person,” says Owen Duffy, curator at the Yeh. “I couldn’t believe no one had done this show yet.”

Born to ethnically Rai parents on a tea plantation in Darjeeling in 1919, Bangdel’s first exposure to art was probably in the form of Hindu iconography.  According to his biography, Against the Current by Don Messerschmidt and Dina Bangdel, he took up painting after his parents’ British supervisor gifted him a set of postcards showing 19th-century French art.

As a young man, Bangdel attended art school in pre-independence Calcutta and then got a job at the advertising firm of DJ Keymer. He befriended his adman colleague Satyajit Ray, who would later rise to fame as a  filmmaker. They hung out together at the India Coffee House, a famous watering hole for the Bengali cultural class.

Bangdel’s relocation to bustling Calcutta amidst the terrible Bengal Famine had a profound impact on his worldview.  It was during this time that he wrote three Nepali-language novels depicting the lives of the destitute and homeless, including Langadako Saathi (The Cripple’s Friend).

One of Bangdel’s earliest paintings in the show is from this period. It is a 1943 watercolor depicting a shanty-town on the outskirts of Calcutta — one of many that must have sprung up at the time.

In the 1950s, Bangdel moved to Paris, where he burned newspapers to stay warm in his dilapidated apartment. He studied cubism and abstract expressionism and befriended European artists like Marc Chagall. He met Pablo Picasso, who, when hearing Bangdel was from Nepal, reportedly asked, “You mean Naples?”, according to his biography.

Bangdel’s painting Muna Madan, made in 1959 in Europe, is based on Laxmi Prasad Devkota’s epic love poem. It depicts the title characters in their final embrace before Madan leaves for a trade mission to Tibet.  Duffy says the painting reflects Bangdel’s nostalgia for Nepal — a sentiment to which many Nepalis, whose diaspora now spans the globe, can relate.

“[Bangdel] spent a lot of time leading up to his ‘return’ to Nepal imagining his homeland,” says Duffy. “Even though, at that point, he had not yet set foot on Nepali soil.”

Bangdel befriended the Nepali Congress leader BP Koirala during his time in Europe. After Koirala became Prime Minister in 1959, Koirala invited Bangdel to move to Nepal.  However, it was not until after King Mahendra deposed Koirala in a royal coup in 1960 that Bangdel arrived in Kathmandu.  Mahendra quickly named Bangdel head of the Faculty of Fine Arts at Tribhuvan University.

Bangdel made Moon Over Kathmandu, the title painting of the exhibition, soon after landing in Nepal in 1962. In this nocturne, a copper moon illuminates the old city. A double-pennant shape features on the center-left side of the canvas — evoking the Nepali flag and, perhaps, its use of lunar symbolism for calm and serenity.

After settling in Nepal, Bangdel continued to paint and also gained prominence as an academic.  He published numerous written works, including a dictionary, a book on birds, and his 1989 opus Stolen Images of Nepal, which called global attention to widespread religious art theft for the Western market.

In recent years, many Nepali visual artists, including Ang Tsherin Sherpa, Hit Man Gurung, Manish Harijan, and Ashmina Ranjit have gained international recognition by melding Nepali and international styles.  However, during Bangdel’s time, such mixing was much less common.

“Post-2000, in the Internet era of globalization, there has been an interest in cultural hybridity in art,” says Duffy.   “But, depending on what your definition of ‘modern art’ is, a lot of the Rana-era artists were actually the first to begin working in oil painting using Western styles.”

Bangdel was probably the first Nepali to paint in the cubist and abstract expressionist styles, preceding others like Surendra Pradhan and  Kiran Manandhar.

After Bangdel died in 2002, his daughter Dina carried on many of the projects he started. A specialist in Newar tantric iconography, Dina taught at Virginia Commonwealth University in the US and Qatar. She continued to document art theft and helped promote up-and-coming Nepali artists until she died of cancer, at the age of 53, in 2017.  Among the unfinished projects Dina left behind was a retrospective exhibition of her father’s life’s work.

Bibhakar Shakya, Dina’s husband, took it upon himself to complete this goal.  He recruited Duffy, a former graduate student of Dina’s, to curate the current show, which they hope to tour in other cities. Shakya has also collected digital images of over 700 pieces of Bangdel’s art, many of which will  be included in a large-format art book, to be published soon. In addition, Shakya commissioned the former diplomat Jaya Raj Acharya and Bangdel’s biographer Don Messerschmidt to translate Langadako Saathi into English. The novel is also being made into a feature film.

Shakya first met Dina as a graduate student at Ohio State University, where she was studying art  history and he agricultural economics in the early 1990s. He says these days, he dedicates most of his time to his two sons and to continuing his late wife’s work.

“When Dina died, I had two options. One was, go into a downward spiral of feeling miserable and sorry. The other option was, ‘She’s already gone, so what can I do?’ Doing this work is healing,  and it gives me a purpose in life,” he says. “But more importantly, they deserve it. They are such a fantastic family.”

In this edition of Writing Journeys, Tom Robertson shares hisown insights on learning to write well, especially during thislockdown.