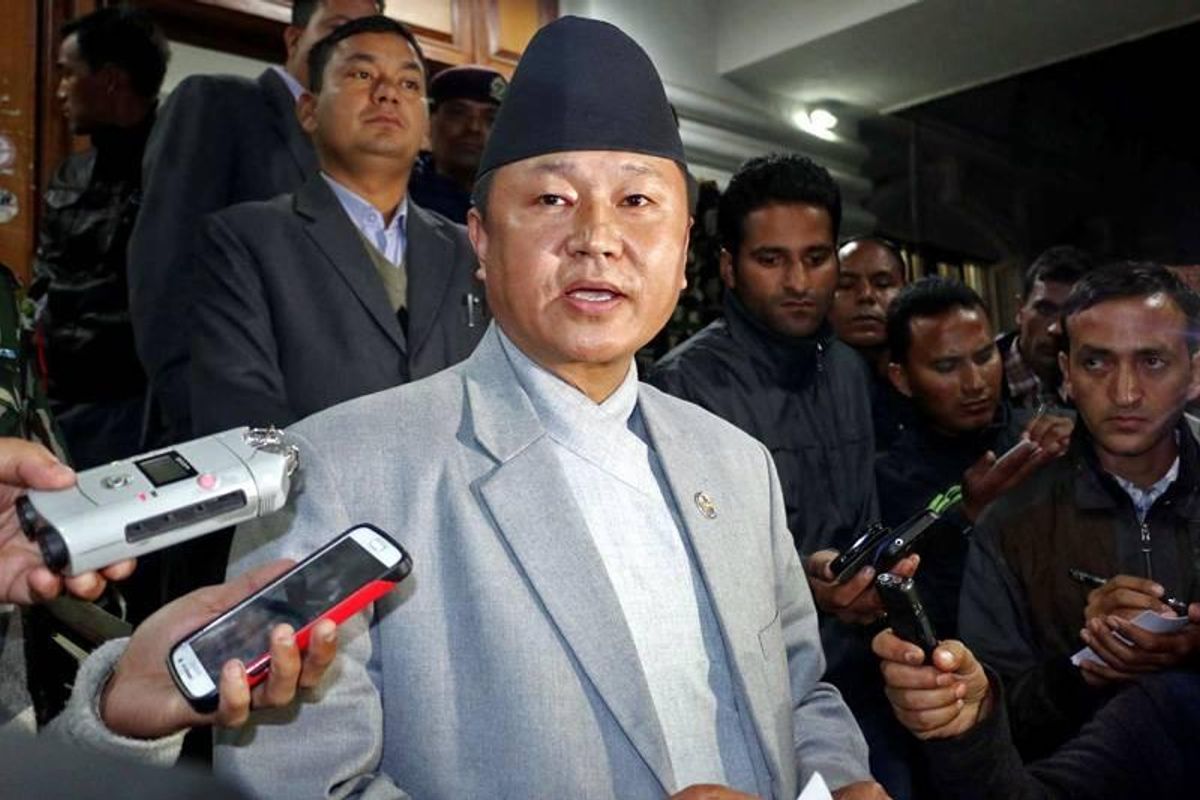 After president Bidhya Devi Bhandari promulgated the ordinance, presented by the Sher Bahadur Deuba government, to amend the Political Parties Act-2017 on Wednesday, murmurs on the streets have re-started in Province 1 regarding the future of incumbent chief minister Sher Dhan Rai.

On Thursday, the Communist Party Nepal-Unified Marxist-Leninist (UML) started the process to split into two parties — the UML, led by KP Sharma Oli, and the UML (Socialist/ Samajbadi) led by Madhav Kumar Nepal. This split is not good news for Rai. Along with being chief minister, Rai is also the co-incharge of the UML for Province 1 and is a close ally to KP Sharma Oli. Considering the current scenario, he has much more to lose than any other member of the party.

The split has made it almost certain that Rai will lose his chief ministership — until and unless a majority of members of the erstwhile Madhav Kumar Nepal's faction of the former party remain in the mother party.

But that — at least for the moment — is uncertain.

Lila Ballav Adhikari, member of the provincial parliament of Province 1 from UML, who has been a solid member of Nepal's faction, said he is yet to decide which side to choose. Elected members of the provincial and local governments have been given 21 days to decide whether they want to remain in the same party or join the splinter group.

“This provision of giving 21 days to choose is crucial. We will consult with fellow members of the party before choosing a side,” said Adhikari, who believes the UML provincial government is on its deathbed irrespective of which side they choose. Adhikari, who is also a law practitioner, said the ordinance with which the UML is being divided “goes against what our constitution imagines” and “favors the wrong directioning of politics which is harmful to a healthy and functioning democracy.”

There are other rumours that Bhim Acharya is likely to replace Sher Dhan Rai, but only if Acharya successfully brings in a good number of provincial members with himself. A source in the personal secretariat of the senior minister of the province confirms this claim. “Bhim is likely to be elevated to the top post within the UML and is likely the choice of opposition if he chooses the splinter group. Rajendra Rai from UML (Socialist) is likely to become the opposition candidate for chief minister,” said the source, choosing to remain anonymous.

Numerous calls were made to reach Rajendra Rai to confirm the matter but his phone was switched off.

The strength of the provincial assembly is 93 members, which is down to 92 after the disqualification of Tanka Angbuhang, Minister of Economic Affairs and Planning, following his jump from Maoist Centre to UML.

Among the 92, UML have 51 members, Nepali Congress have 21, Maoist Centre 15, Janta Samajwadi Party 3 and Rastriya Prajatantra Party and Sanghiya Loktantric Morcha have one member each. Within the 51 members of UML, the splinter group of UML is confident of getting 16-19 provincial members from erstwhile UML. The magic number to reach the top post in the province is 47.

Former Minister of Economic Affairs and planning and parliamentary leader of the province for Moaist Centre Indra Angbo, a staunch critic of his former cabinet boss Sher Dhan Rai, says they are in no hurry to topple the government at this moment. “Let’s see who joins which side in the infighting between the UML and its splinter group. After that, the chief minister will have to take a vote of confidence and things will be clear by then,” said Angbo. Angbo supports the promulgated ordinance stating this ordinance will only weaken those who wanted to kill the Parliament and eventually the constitution. “This is very different to what KP Oli did and is very much in favor of parliamentary stability,” said Angbo.

Rai criticises the central government of Sher Bahadur Deuba on changing the clause of Political Parties Act to facilitate splinter groups which will eventually weaken democracy. “By introducing this ordinance we have done the very thing we were against yesterday with the KP Oli government. And I am not going to sit here and cheer about it; instead, I condemn this act which compromises the ideas of parliamentary democracy which we preach to others,” said Rai, adding that what the Deuba government has done is no different to what KP Oli did.

Province 1 and Bagmati are the two provinces where the UML is still in power, and they are doing everything they can to ensure that power remains the same. On Wednesday, the UML replaced incumbent chief minister Dor Mani Paudel with senior party leader Astha Laxmi Shakya making her the first female chief minister of the country. Shakya is a senior post bearer of the erstwhile UML and can be instrumental in bringing with her a substantial number of supporters to the party.

On Friday, President Bidya Devi Bhandari appointed Yadav Chandra Sharma as the chief of Bagmati Province on the recommendation of the government after dismissing Bishnu Prasad Prasain. Prasain was appointed to the post by the erstwhile KP Sharma Oli government.

At a time when most chief ministers are being replaced, Rai has still somehow managed to keep his seat, making him the longest serving Chief minister from the UML. He has been in power since 2018. But for how long, only time will tell.